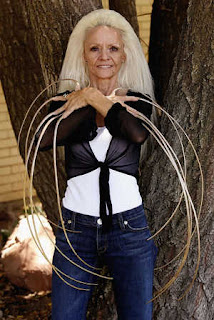 The 65-year-old, from Salt Lake City, became a Guinness Book of World Records holder in 2006.
Her nails measured a total of more than 28ft, with the longest nail on her right thumb measuring 2ft 11in, according to the Guinness website.
Ms Redmond, who has appeared on TV episodes of Ripley's Believe It or Not and Guinness World Records followed a high protein diet to strengthen her nails.
She used to soak her nails in olive oil once a week to stop them becoming brittle until they eventually grew too long to fit in the pan.
The previous record for the world's longest nails, measuring a total of 20ft 2.25in was held by Shridhar Chillal.
Mr Chillal held the record for 20 years before finally cutting his nails in 2000, after their weight made them increasingly difficult to manage. 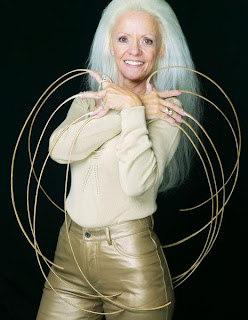 Lee Redmond suffered serious but not life threatening injuires in an accident in Salt Lake City, Utah, on Wednesday, local paper the Desert News reported, in the accident she lost her longest nails. 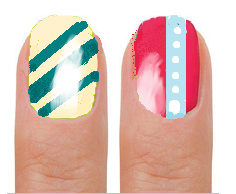 Easy designs for short nails : avoid or lessen the despair of a chipped nail Nail Art : Expression of Self